Currents: considerable on the surface, not so strong on the ground

Reference:
Flower Bed – is an underwater rock outcropping. Stones of various sizes are piled amidst flat silted seabed as if it has been done on purpose. 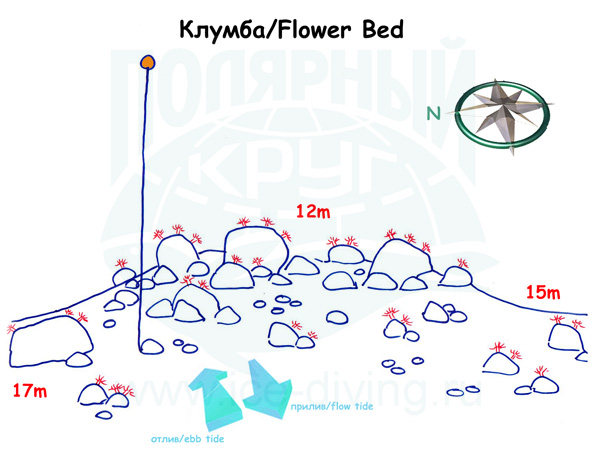 If you drain all the water from the Velikaya Salma, you can see that the Flower Bed is a part of one of the ridges that extend across the sea bottom. Therefore, if you know where to look, you can see the different variations of this dive site. Scientists of geophysics from the Moscow State University helped us to find the Flower Bed. The "Arctic Circle" Dive Centre has been a base for student practice programs of the Geophysics Department of MSU for several years. They come here to learn to work with different underwater locators. At the same time, new interesting dive sites have been found as a result of their practicing.

The highest point of the Flower Bed - with the large boulders - is 11-13m. deep (depending on the tidal phase), and the deepest point - a flat bottom at a depth of about 17m. The stones are piled haphazardly, and the pile is about 10-15m. in diameter. It resembles a rockery or a flower bed - due to densely growing sea anemones. Thanks to its small size, it’s possible both to catch sight of the Flower Bed in general, and to look closely to see the details.

The Flower Bed dive site is good for diving nearly all year round and at any time of the day. In summer it takes just a couple of minutes to bring divers to this dive site by speedboat from the pier of the "Arctic Circle" Dive Centre and in winter you can easily get there by snowmobile. One more advantage of this dive site for ice divers is that it's enough to make just one "maina" (ice-hole) to enjoy the stone garden and sea anemones. The Flower Bed is picturesque in the daytime and amusing at night. Perhaps it's the best place for a night dive due to the close proximity of the dive site, its depth and fauna.

The White Sea, Kandalaksha Gulf, the Velikaya Salma Strait. As always there is a highly curved coastline in this area, with small islets and picturesque bays. The sea resembles a lake here - the water is so calm, there is no place for strong gusts of wind or waves. But as soon as you descend under the water, the forces of nature show their presence: there are lots of places with a strong tidal current in the Kandalaksha Gulf. These currents have a strict regularity - they blow six hours in the one direction, and six more - in the other one. Thanks to such movements of water, wildlife blossoms in all its splendor on the seabed. Some of the most interesting dive sites are concentrated here, but it's not so easy to get there - the Velikaya Salma is away from civilization, as well as the "Arctic Circle" Dive Centre, which is just in a stone's throw to the underwater beauties of the Salma. Concerning the Flower Bed dive site we can say that it is even closer.

The Flower Bed is a convenient place for sessile marine organisms. A dense colony of sea anemones Metridium Senile occupies the stones. Metridiums are large sea anemones, up to 20 cm tall, with numerous slender, pointed tentacles and feathery appearance. Their colour varies from white to bright-red, some stones may be populated only by white forms, the others - only by red ones, for example. But the most vivid picture is when Metridiums of different colour grow together on one and the same stone - like a real bouquet. Metridiums feed on any organic matter brought by the current - both plankton and detritus (ie, what had been alive, but then died). Usually they are unfolded, and you can see their mouth and tentacles fully expanded, resembling a palm tree, but in some cases they may retract it and become a low, irregularly shaped, jelly-like disc. It happens if something scares them, a diver's hands or fins, for example. And sometimes, all the colony may close - a kind of mass depression, but this is a seasonal phenomenon, it starts in December and ends by the mid-February.

In addition to sea anemones it is interesting to observe various fish here. Сod and sea bass hide in cracks, wolf-fish can be found in the holes. If you treat a wolf-fish to a mussel, that can be found right there on the bottom, it will not refuse to eat it, quite probable, and you'll find out why should this fish have such big teeth.

For those who are fond of small invertebrates, the pile of stones is a real paradise. Lots of shrimps, hermit crabs, spider crabs, sea urchins, worms of all shapes and nudibranchs will take all your time and attention during the dive. If you plan a night dive at the Flower Bed, you will see the active phase of life of the crustaceans. Night is a hunting time for them. But do not forget that the night itself is a seasonal phenomenon in the White Sea region, and it's not getting dark here at all in June and July.