Currents: basically not so strong 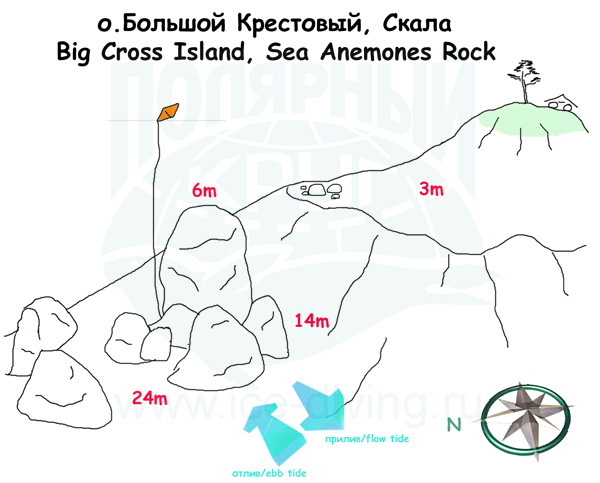 The rock is an outcrop on the slope of Big Cross Island, the size of a three-storied building, shaped like a dragon's tooth. A sandy plateau surrounds the island under the water, at a depth of 6-7m. it turns into a rather steep slope where a stone massif rises. The depth of its base is 13-15m. at the coastal side, while at the seaward side it reaches 19-21m. There are several groups of boulders at a depth of 23-25 m (at the base). The top of the Rock is 6-9 m. deep. It should be noted that the seabed in this place is quite silted, as everywhere in the White Sea, indeed. Therefore, if you have a tendency to swing with fins and hands under water, we advise you not to make abrupt movements at this dive site, as it may result in a crucial visibility deterioration due to the cloud of turbidity. The central and highest part of the rock is surrounded by boulders of various sizes, shapes and quantity of marine dwellers.

The White Sea is characterized by distinct tides. The tides are regular and semi-diurnal. Twice a day there are ebbs and flows, causing strong tidal currents in certain places with the speed varying from 0.1 to 4 m/sec. There are no such currents at this dive site that can not be overcome, but they should be taken into account while planning a dive. Another factor is the water temperature. In summer, the thermocline divides the water into two layers: above it, the water warms up to 12-17ºC, below it the temperature does not rise above 8ºC. In winter, under the ice, the water temperature is about -1ºC. The conditions of the dive are not too complicated, but you need to take into account a number of parameters: the depth, the steep rock wall, the silted seabed, the temperature and the current. Thus, it can be concluded that diving at the Sea Anemone Rock dive site is recommended for divers with good buoyancy control skills.

As soon as a diver descends under the water to the Anemone Rock, a fluffy multi-colored sea anemone carpet strikes the eye. Its slender, pointed tentacles are very numerous, and the name of the species is Metridium senile. Metridiums are large anemones, up to 30 cm in height, but if you touch their tender tentacles, then the animal will shrink into a tight muscular stump. In cold water, all animals are unhurried, so the squeezed Metridium is not to open soon. These anemones feed on plankton and any organic suspension. If you dive when there are lots of lion's mane jellyfish (Cyanea arctica) floating in the water, you have a chance to watch the anemones catch them by their long tentacles. Metridiums are not temperature-demanding, so they can be met from a depth of half a meter and on any more or less solid substrate, starting from the kelp leaves and ending with sunken ships. On the Anemone Rock they grow so thickly that they resemble a flower bed or a fluffy carpet, giving photographers and operators a rich opportunity for creativity. In addition to the magnificent garden of metridiums, there are other interesting marine animals. For example - a variety of fish. Here you can meet cod and wolffish, hiding in the rocks, and sea bass, and cold-water scorpion fish - cottids. Shrimp and spider crabs, nudibranch mollusks and hermit crabs graze among the anomones and along the walls covered with red algae. Such a diversity of life attracts attention of marine biologists conducting research on the Anemone Rock and of tourists divers, who are ready to dive at this extraordinary dive site again and again. This place is so unique that it fell under the protection of PADI as a natural heritage site.