Reference: Biofilter Bay is a small bay, that goes far into the shore and is protected by steep cliffs on one side. The bay is free from sea currents. The vertical rocky wall extends down to 7-8m. under water, then the slope becomes flatter and gradually turns into a silted seabed at a depth of 12-15m. From the water's edge down to 6-7 meters, there are brown seaweed - fucus and kelp. Local dwellers are starfish and Ascidiacea sp, one can also come across Nudibranchiata molluscs, gastropods and bivalve molluscs. The name ‘the Biofilter Bay’ comes from the numerous water filtering aquatic animals that inhabit this area. 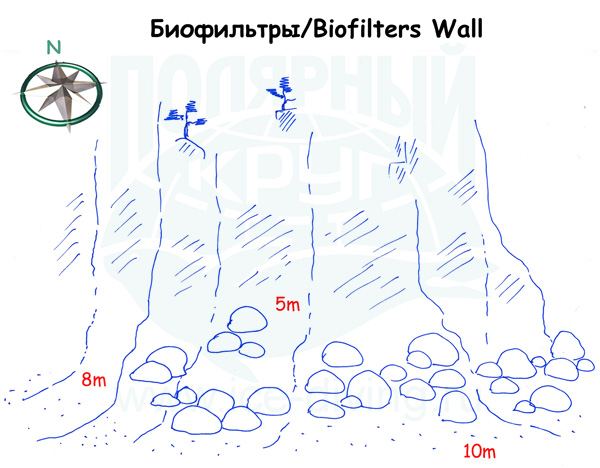 The Biofilter Bay is nothing extraordinary in summer, but it transforms completely in winter. The most interesting thing about ice diving here is the ice itself. Due to tidal currents, that are rather remarkable in the White Sea, the water level difference between the low tide and high tide phase reaches 2m., and the periodicity of the process is about 12 hours. Thus, about 6 hours the water rises, and almost as long it decreases. 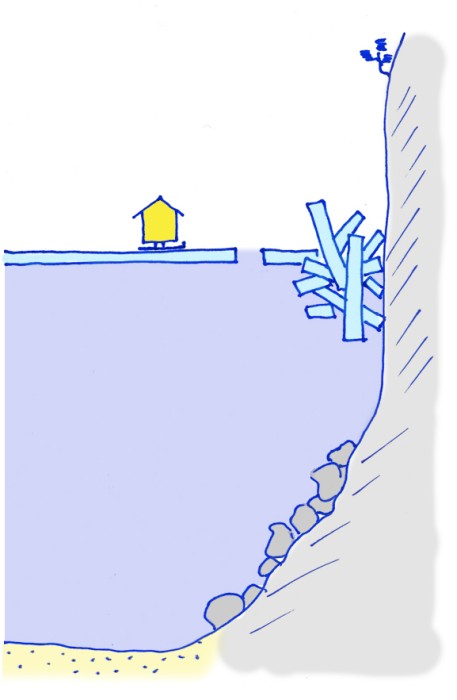 Therefore ice does the same, following the water, and in places where it comes to the rocks, it freezes, then breaks and freezes again. As a result, ice breaks under the water reach 4-5m. near the vertical rock wall!

But despite such a thickness, icebergs are well illuminated by the sunlight, that is passing freely through the cracks where the ice is joined to the shore.

In summer the water temperature here can reach 20-22ºC above the thermocline level, and 9-10ºC - below the thermocline. In winter, the water cools down to -1.8ºC and these figures remain the same for the entire ice season just with small variations. The water visibility at the Biofilter Bay varies not only on a seasonal basis, but depending on the depth too and it rarely exceeds 20 m. in the horizontal plane.

The Biofilter Bay is located in the Great Salma Strait of the Kandalaksha Gulf of the White Sea. It owes the name to the WSBS MSU, that is not far from the bay, and particularly to Kirill Voskresensky, an Associate Professor of the Invertebrate Animals Zoology Department, who awarded this place with such an original name. There is some truth is in the name of the bay. Biological filters are animals that filter food particles from water. The examples are bivalve mollusks mussels and balanus crayfish, or sea acorns, that are widespread in the White Sea. All the rocks and stones in the littoral zone (the so-called coastal zone, flooded with water in the high tide) of the Biofilter Bay are covered with balanuses and mussels, what apparently gave the idea to Kirill Voskresensky to name the bay this way.

If you go diving here in warm summer season, it's interesting to look at fucus algae, which stand vertically in high tide phase. These water plants with air bubbles grow only in the Arctic and only in shallow waters. Lots of aurelia jellyfish (Aurelia aurita) are brought to the bay in summer. They clog the whole bay a few meters deep - a rather unusual sight. As for the filter feeders, in whose honor the bay was named, there are not so many of them - only small mussels grow in shallow water and balanuses on the rocks. In winter, below the level of the ice wall and the hummocks, there are hermit crabs crawling among laminaria, starfish and shrimps, cod and catfish hiding in the crevices. Only in winter one can see small crustaceans of amphipods rise onto the inner, underwater side of the ice. They live in grooves directly in the ice, thus hiding from the fish. In March, some crustaceans begin the breeding season. If you look closely, you can see a shrimp or a crayfish bear their offsprings in their lower abdomen. In addition to animals, it is interesting to look at the hollow ice stalactites formed by desalinated water on the inner surface of the ice ceiling. These "chandeliers" can be up to 20 cm long and about 10-15 cm in diameter.